Forests are the support system of our existence on this planet. Forests are bestowed as a boon to mankind and are regarded to have great significance economically, environmentally and industrially. But with overpopulation, urbanisation and globalisation, human beings are destroying forests at a fast pace. The situation has become quite alarming now and, depletion of trees or deforestation needs a solution to keep the eco-system a healthy one. 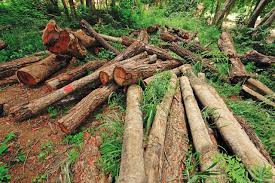 Why has deforestation such an effect on mankind? Let’s discuss the impacts of deforestation to understand the graveness of the situation.

To survive, we need to breathe and that requires oxygen. Trees are a great supplier of oxygen, they provide us with this essential gas through the process of photosynthesis during the daytime with the help of sunlight. So, it goes without saying, the more the number of trees, the more the air would be purer and pollution-free. Indiscriminate cutting of trees can lead to an alarming situation where we could die because of the dearth of oxygen. Not only that, trees absorb carbon-di-oxide during the process of photosynthesis thus helping to keep the balance of O2, CO2, and Nitrogen constant.

Deforestation is one of the main causes of the greenhouse effect. When trees are cut down, the water-cycle gets disturbed and, as a result, we receive less rain. The amount of oxygen decreases and carbon-di-oxide increases. Eventually, heat radiated by the earth get trapped on the earth itself increasing the temperature. This is the main cause of global warming and the greenhouse effect.

Trees stop the flow of rainwater from mountain slopes by acting as obstructions and barriers. This protects the soil from flowing into the rivers and, also controls the probabilities of soil erosion and landslides. The roots of the trees bind the soil together stopping it from flowing away. If the soil is shallow, the trees keep the soil in place by binding it with the underlying bedrock. Cutting down the trees in mountainous regions having shallow soil increases the risk of landslides.

The worst effect of deforestation is perhaps the deterioration and destruction of bio-diversity. Biodiversity is important for ecosystem sustainability, agriculture, medicine, and many other things.

The impacts of deforestation are getting noticed throughout the world and many countries are trying to check it as well as making it a global issue. If proper measures are not taken, the earth will not sustain. Many tropical countries  like China, Malaysia, Thailand, Bangladesh have lost already lost large areas of their rainforest reserve. With population increasing by leaps and bounds, these countries and the world as a whole are facing serious environmental threats. India has declared deforestation as a national emergency.

Since the causes of deforestation are several, it is not possible to get rid of this problem overnight. It would take decades and co-operation from every part of the world. Without trees, we will be an extinct race. So, it’s high time we should ponder over the problem and adopt afforestation as our new motto.

This blog post is inspired by the blogging marathon hosted on IndiBlogger for the launch of the #Fantastico Zica from Tata Motors. You can apply for a test drive of the hatchback Zica today.